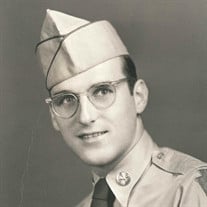 Mr. Robert G. Gust, age 93, passed away peacefully on Saturday, September 18, 2021 in Muskegon. He was born on August 16, 1928 to George and Ethel (Aaron) Gust in Detroit, MI. Bob proudly served his country during the Korean Conflict while in the United States Army. After being Honorably Discharged in 1952, he married the former Elsie E. Davis in Muskegon on May 9, 1953 and she preceded in him death in 2012. Together, Bob and Elsie raised their three children, Pam, Lin, and Jim in Muskegon. Bob worked at Teledyne Continental Motors, retiring in 1988. Bob was a former member of St. Jean Baptiste Catholic Church where he was a part of the Men’s Club and served as an eucharistic minister and usher. He was recently a member of Our Lady of Grace Catholic Church. Bob enjoyed gardening, building model airplanes, traveling, completing jigsaw puzzles, and cheering on the Detroit Tigers and Michigan State University. He was a member of the Stamp Club and a former Boy Scout Leader. Most importantly was the time spent with his family, including his three children, Pamela (Daniel) Shunta, Linda Gust, and James Gust; grandchildren, Sarah Kokx, Amanda (Jonathon) Thompson, and Scott Schindlbeck; great-grandchildren, Keara and Brair Kokx; several nieces and nephews; and sister-in-law, Barbara Davis. Along with his wife, Elsie, Bob was also preceded in death by his parents, and brother, Edward Gust. A Mass of Catholic Burial will be held 10:00AM Friday, September 24 at Our Lady of Grace Catholic Church (451 S. Getty St., Muskegon, 49442). Visitation with the family will be Thursday, September 23 from 5:30PM – 8:00PM at The Walburn Chapel of Sytsema Funeral & Cremation Services, 1547 W. Sherman Blvd., Muskegon, MI 49441, with the Rosary prayed at 7:30PM. Burial to take place at Lakeside Cemetery. In lieu of flowers, memorial contributions may be directed to Harbor Hospice Foundation or Disabled American Veterans. Please feel free to share a memory with the family online at www.sytsemafh.com.

Mr. Robert G. Gust, age 93, passed away peacefully on Saturday, September 18, 2021 in Muskegon. He was born on August 16, 1928 to George and Ethel (Aaron) Gust in Detroit, MI. Bob proudly served his country during the Korean Conflict while in... View Obituary & Service Information

The family of Robert G. Gust created this Life Tributes page to make it easy to share your memories.

Send flowers to the Gust family.