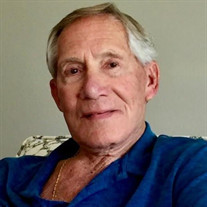 Bob Packer passed away Saturday February 12, 2022. Dad was born in Grand Rapids Michigan and spent his childhood years in the cottage his father built at Bostwick Lake and later in Alto living above the Alto Tavern that his mother’s father owned. In his teen years, he worked at the service station across the street from the tavern while he attended Lowell High School where he was an avid athlete, playing football and running track. He met the love of his life, June, while in high school and they married just days after Mom’s graduation in 1953. Dad attended MSU, graduating with his degree in Veterinary Medicine with the encouragement and support of his mentor Dr. Richard Siegle DVM whom he met in Alto. Dad was grateful for this opportunity and joined Dr. Siegle in his Cascade practice. It was not long into his career that he realized he desired to “know a lot about one thing rather than a little about a lot of things,” so with Dr. Siegle’s blessing, he enrolled at Wayne State Medical School to pursue his goal of becoming an Ophthalmologist. He and Mom moved to Muskegon in 1966 with Mark age 10 and Kim age 8 where he began his practice. I, Kate arrived in 1968. For over 50 years, Dad was active in the Muskegon Medical Society and for many of those years served as a Delegate with the Michigan State Medical Society. He was very proud to serve his community and made his commitment as a physician and healer his priority. He beamed with pride when approached by former patients and their families with their memories of his impact on their lives through his care. Dad was always an athlete; running, biking, swimming, skiing, and playing tennis and struggled as he aged when his physical body failed him. Most recently he took to walking laps in Meijer with the aid of a cart. He always was sure to have yogurt, bananas, and grapes in his cart just in case he was questioned! Dad and Mom were active supporters of the Muskegon Museum of Art and enjoyed attending the symphony, theater, and opera in Grand Rapids. In the summer, they took to the water and made many wonderful memories cruising along the shore of Lake Michigan aboard the “MaryJ”. He was a lover of classic cars, the sunset over Lake Michigan and Key Lime pie. His go to beverage was a Stoli on the rocks with 3 wedges (not slices, you can’t squeeze a slice) of lemon, and meal a caesar salad with grilled salmon (grilled medium) with the dressing on the side. Thank you to his special bartender friends for always taking such good care of him. Dad came from nothing, worked very hard and built an amazing life for his family. He never showed judgment and was loving and supportive to his friends and family in the LBGTQ community and would encourage others to do the same. He touched many lives and will be deeply missed. Dad was preceded in death by his wife, Mary June Packer (2015), his son, Robert Mark Packer (2013) and his daughter, Kimberly Ann Packer-Mulka (1999), and his brother Thomas Packer. He is survived by his daughter, Kate Brickley; granddaughters, Olivia and Ana Brickley; grandson, Nick (Rachelle) Mulka; his brother Ronald Packer; special friends Joe and Tom Kosh, Emma Speers, Jim Brickley; brothers and sisters-in-law; as well as nieces and nephews; canine companion Radar and feline friends, Alfie and Buddy. There will be no service at this time per dad’s wishes. Memorial gifts can be directed to the Packer Family Fund of the Community Foundation for Muskegon County. Online gifts can be given at www.muskegonfoundation.org/give-now. Arrangements entrusted to The Lee Chapel of The Sytsema Funeral & Cremation Services, 6291 S. Harvey St. Norton Shores, MI 49444. Feel free to share a memory with the family at www.sytsemafh.com.

Bob Packer passed away Saturday February 12, 2022. Dad was born in Grand Rapids Michigan and spent his childhood years in the cottage his father built at Bostwick Lake and later in Alto living above the Alto Tavern that his mother&#8217;s father... View Obituary & Service Information

The family of Robert C. Packer MD created this Life Tributes page to make it easy to share your memories.

Send flowers to the Packer family.