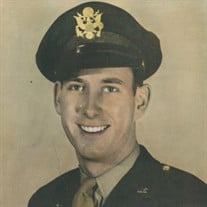 Robert C. “Bob” Sterritt, Lt. Col., Ret., age 98, passed away Friday, September 24, 2021, surrounded by his sons. Bob was born August 27, 1923 on Squaw Island, County of Charlevoix, MI to Robert and Vera (Pitcher) Sterritt and lived most of his life in the area. Bob enlisted in the Army Air Corp. as an Aviation Cadet in October 1942. Military sent him to the college training detachment at Hiram College (Ohio) from February 1943 to August 1943. Next to San Antonio, Texas to the Classification Center where he was tested and accepted for Pilot Training (single engine fighter pilot). Military and ground school courses lasted from September 1943 to January 1944. Bob advanced to Primary Pilot Training School at Stamford, Texas where he trained to fly the PT-19 Fairchild. Further advancement led Bob to the second phase for the Basic Training in the higher horsepower Vultee BT-13A-450HP at Sherman, Texas from March 1944 to May 1944. June 1944 to August 1944 found Bob training in the higher horsepower military aircraft, the AT-6 Texan-650HP. On August 4, 1944, Bob graduated with silver wings and was told, "You are now a full-fledged Fighter Pilot." Onto military combat training in the 1125HP Curtis Warhawk P-40 (first line fighter aircraft) for ground gunnery and ocean gunnery. Bob continued training in the twin engine AT-10 aircraft. At the completion of his training, Bob was sent to Tallahassee, Florida to await assignment to a fighter combat school. After serving 2 months at Tallahassee, he went on to Page Field in Fort Myers, Florida where he was transferred to the new first line Aircraft, the P-51 Mustang-1650HP. From December 1944 to April 1945, Bob engaged in intensive air combat tactics prior to over-seas assignment. In June 1945, Bob was on his way to the South Pacific by way of Johnson Island and landed at Iwo Jima (Japanese Territory). His first mission was to protect the B-29 Bombers flying from Guam & Tinian. Bob’s first long-range mission to Nagoya, Japan was August,1945 (7 hours and 15 minutes). At the end of World War II in August 1945, the 72nd Fighter Squadron was moved from Iwo Jima back to Saipan. Bob’s unit is credited with the longest over-water missions during World War II (one way distance from Iwo Jima to Tokyo was 750 miles). Bob was stationed over-seas from June 1945 to September 1946 and then discharged to the Air Force Reserves to continue towards military retirement. After 29 years of service to his country, Bob retired from the Air Force as a Lt. Colonel. On May 14, 1949, Bob married Shirley Jean Greene in Muskegon and she preceded him in death on October 14, 2019 after 70 years of faithful marriage. During his civilian years, Bob worked as an Insurance Investigator and retired from Equifax Insurance Services in 1985 after 38 years. He was a member of St. Mary of the Immaculate Conception. Bob enjoyed his Friday Breakfast with a kind and generous friend, George and others at the Overboard Inn where he had a reputation for his friendly and warm personality. He will be greatly missed by his loving family and many dear friends. Survivors include 2 sons, James B. (Kathleen) Sterritt, Joseph B. Sterritt and friend, Lesa Dodge; 4 grandchildren, Stacy (Brian) Holtsclaw, Kelly (William) Clancy, Emily (Kyle) Johnson, Joseph (Megan) Sterritt; 6 great-grandchildren, Will, Kaleb, Samantha, Kaitlyn, Mackenzie, Ryan; a loving sister, Beverly England; a brother-in-law, Dan Thill; and several nieces and nephews. Bob was preceded in death by his wife; his daughter, Janelle Sterritt; his brother, Allen Sterritt; and his sister, Mavis Thill. Mass of Christian Burial will be celebrated 11:00 AM Thursday, October 7, 2021 at St. Mary of the Immaculate Conception Catholic Church (239 W Clay Ave) with the Rev. Fr. Michael P. Olson presiding. Visitation will be held 5-8 PM Wednesday at The Lee Chapel of Sytsema Funeral & Cremation Services, 6291 Harvey St, Norton Shores, MI 49444. Interment will take place at St. Mary’s Cemetery with full military honors offered by the Muskegon County Council of Veterans of Foreign Wars and the Honor Detail from Wright-Patterson Air Force Base. Memorial Contributions may be directed to St. Mary of the Immaculate Conception Catholic Church. Sign the online guestbook at www.sytsemafh.com

The family of Robert C. "Bob" Sterritt Lt Col,Ret created this Life Tributes page to make it easy to share your memories.

Send flowers to the Sterritt family.