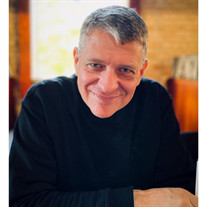 Robert Carl Stuberg, age 62, of North Muskegon, Michigan, died peacefully February 12, 2022 in Punta Gorda, Florida. He was born in Omaha, Nebraska on September 22, 1959 to Carl and Marie (Miller) Stuberg. He graduated from North High School in Omaha, Class of 1978. He was awarded the degree of Bachelor’s of Music Education Summa Cum Laude from the University of Nebraska at Omaha in 1983. An entrepreneur, author, speaker, consultant, life coach, and mentor, Robert believed in helping people reach their potential by clarifying their strengths, igniting their passion, and defining their own unique life purpose. He worked first at Nightingale-Conant in Chicago, retiring as Executive Vice President. He then launched his own consulting and coaching firm and went on to develop websites and products in the self-development field. Quick-witted and warm, Robert was able to connect with people almost instantly and help them find their way forward. A talented classically trained musician, Robert studied oboe performance at the National Music Camp at Interlochen and at the John Mack Oboe Camp. Later in life, he became an award-winning Distinguished Toastmaster in record time and he returned to his passion for playing jazz saxophone with his Band-in-a-Box backing tracks. Nothing seemed to give him more joy than sharing his tunes, “Over the Rainbow” being one of his favorites. His family and friends are sure to always remember his boisterous laugh, his winning smile, and the glint in his baby blue eyes. He is survived by his wife, Julie Stuberg; son, Carleton Stuberg; and brother, Wayne (Rhonda) Stuberg. In addition to his parents, Robert was preceded in death by his brother, Paul Stuberg. A celebration of Robert’s life will be held on June 24th, 10:00 a.m. at St. Mary’s Church, 239 W. Clay Avenue, Muskegon, Michigan. In lieu of flowers, donations in Robert’s memory can be made to support jazz at Blue Lake Fine Arts Camp in Twin Lake, Michigan or to promote excellence in teaching and learning through the Norse Education Foundation at the Community Foundation for Muskegon County. Arrangements by The Lee Chapel of Sytsema Funeral and Cremation Services, 6291 S. Harvey St., Norton Shores, MI 49444.

The family of Robert C. Stuberg created this Life Tributes page to make it easy to share your memories.