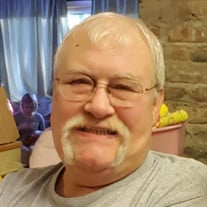 Robert T. Williams Jr, age 69, passed away suddenly on Friday, April 22, 2022 in Whitehall. He was born to Robert and Ruth (Shepard) Williams in Orlando, FL. A lifelong resident of the Muskegon area, Bob married his high school sweetheart, Sandra Harkema, on June 8, 1974 and she survives him. Bob was a talented woodworker and was employed at Amstore and Competitive Edge as a cabinet maker. He enjoyed collecting and researching Fenton glassware, antiquing, and yard sales. His sense of humor was unlike any other and well known by his friends and family. Bob’s true passion in life was music, which he passed down to future generations. He played the electric guitar and had an extensive CD collection. Most importantly, Bob loved being a grandfather and cherished the time he spent with his grandchildren. Bob is survived by his wife, Sandy; daughters, Elizabeth Fergison and Andrea (Scott) Idsinga; grandchildren, Riley Fergison and Coraline Williams, Destine and Caitlyn Fergison, Bella and Addison Idsinga; siblings, Patricia (Robert) McNeal, Linda (Jack) Workman, and James (Lori) Williams; brother and sisters-in-law, Wayne (Vickie) Harkema, Joyce Elmore, and Bonnie (John) Ulmer; and many nieces and nephews. He was preceded in death by his granddaughter, Alisa Love Idsinga; parents; sister, Sharon Northup; in-laws, Richard and Betty Harkema; and brothers and sister-in-law, Kris Harkema, Fay Bollenbach, and John Elmore. A Celebration of Bob’s Life will be held Saturday, June 4 from 1:00-4:00PM at Grace Christian Reformed Church (2500 E. Laketon Ave., Muskegon, 49442). Arrangements by The Sytsema Chapel of Sytsema Funeral & Cremation Services, 737 E. Apple Ave., Muskegon, MI 49442.

The family of Robert T. Williams Jr created this Life Tributes page to make it easy to share your memories.