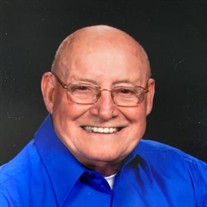 ******* The Celebration of Life for Roger has been rescheduled *********** Roger Edward Hillstead, age 89, a resident of Fruitport, passed away Thursday, December 23, 2021 at the Leila and Cyrus Poppen Hospice Residence. He was born July 31, 1932 in Hersey, Wisconsin, a son to Edmund and Constance (Hansen) Hillstead. In 1942, the family moved to the Mona Lake area of Muskegon Heights. Roger spent many years as a Boy Scout and obtained his Eagle Scout badge at the age of 15. He attended grade school at Mona Lake Elementary and graduated from Muskegon Heights High School in 1951. After graduation, he enlisted in the Marine Corps from 1951-1954 and served during the Korean War. On May 4, 1957, he married Joan Marie Dobb at Unity Reformed Church in Muskegon. Roger was in maintenance at Muskegon Piston Ring for 42 years. He was active in the union where he served as Steward, on the Bargaining Committee, and as a Trustee and Financial Secretary for 23 years. In 1997, at the age of 65, Roger began a second career as a deck hand on the Grand Valley State University research and education vessels, the W.G. Jackson and the D.J. Angus. He was known by his family as “The Little Rascal”. Roger was an avid bowler and golfer for many years. He enjoyed spending time with his family and attending Muskegon Big Reds and the University of Michigan football games. Roger served as an elder and deacon at Unity Reformed Church and Fifth Reformed Church for many years. Roger is survived by his wife of 64 years, Joan; three children: Linda (Ted) Bringedahl of Fruitport, Scott (Karen) Hillstead of Winchester, Tennessee, Steve (Sarah) Hillstead of Grand Rapids; seven grandchildren: Kara Hillstead, Kelcie (Nick) Mashburn, Kailee Bringedahl, Kendra Bringedahl, and Kristian Bringedahl all of Fruitport, Geoff (Sam) Hillstead of Highlands Ranch, Colorado and Kaitlyn (Connor) Wells of Nashville, Tennessee; one great-grandchild, Hudson Mashburn; two sisters: Verna Mae Gross of Fremont and Marlene (Arno) Guske of Grand Haven; one sister-in-law, Joan Hillstead of Kalamazoo; several nieces and nephews. Roger was preceded in death by his parents; brother, Virgil Hillstead, and his brother-in-law, Rudy Gross. A celebration of Roger’s life will be held 1:00 PM Thursday, February 24, 2022 at Fifth Reformed Church. Visitation with the family will be one hour prior to the service. MEMORIALS to C.S. Mott Children’s Hospital in Ann Arbor or the Big Red Athletic Foundation will be appreciated. Share memories with the family at their online Guest Book at www.sytsemafh.com Arrangements by The Lee Chapel of Sytsema Funeral and Cremation Services, 6291 S. Harvey St., Norton Shores, MI 49444 (231) 798-1100

******* The Celebration of Life for Roger has been rescheduled *********** Roger Edward Hillstead, age 89, a resident of Fruitport, passed away Thursday, December 23, 2021 at the Leila and Cyrus Poppen Hospice Residence. He was born July 31,... View Obituary & Service Information

The family of Roger E. Hillstead created this Life Tributes page to make it easy to share your memories.

******* The Celebration of Life for Roger has been rescheduled...