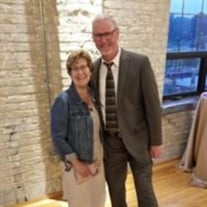 Mr. Roger H. Walstra, 66, passed away very unexpectedly Saturday, April 30, 2022, in Muskegon. He was born September 23, 1955 to Daniel and Marion (Jonkman) Walstra in Chicago, and moved to the Muskegon area in 1978. Roger attended Harvest Bible Chapel, Spring Lake, and was retired from Herman Miller. He was an avid reader, enjoyed golfing, his grandkids, biking, fishing and traveling – doing all of them at the same time was the best. On August 4, 1979 Roger married Kimberly Bowen. Survivors include his wife, Kim; three children: Whitney (Peter) Larson, Kristen (James) Vande Glind, Timothy (Stephanie Helmus) Walstra; he was Pop-Pop to his six grandchildren: Andon, Katherine “KC”, David, Greta, Nora, and Annika; two sisters: Cynthia Bykerk, Lucille Walstra; one sister-in-law: Donna Walstra. He was preceded in death by his mother and father, and one brother Dennis Walstra. A time to gather with Roger’s family will be Thursday, May 5, beginning with a brief family time of sharing at 4:00 PM followed by visitation until 6:00 PM, at The Lee Chapel of Sytsema Funeral and Cremation Services, 6291 S. Harvey St., Norton Shores, MI 49444. Contributions in memory of Roger may be made to Muskegon Christian School.

The family of Roger H. Walstra created this Life Tributes page to make it easy to share your memories.

Send flowers to the Walstra family.