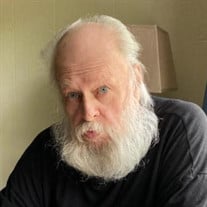 Ronald Gene “Gramps” Cunningham, age 74, passed away Saturday, April 16, 2022. He was born December 28, 1947 in Muskegon to Johnnie and Goldie (Brown) Cunningham. Surviving are many nieces and nephews and great nieces and nephews who Ron loved dearly. His favorite was the one who was with him at the time. They include: Pat (Chris) Thompsen, Dixie Rich, Ed (Deanne) Sherman, Janet Sherman, Jeanie Sherman, Colleen (Thom) Macy, Kathy (Mark) Vellenga, Christine (Mark) Fazakerley, Laura David, Connie (Chuck) Ondrejka, Lynn (Tom) Kurtz and their families, and also the family of Fred Briggs. Gramps was a friend to all, but on his trips to Muskegon he was always welcomed into the homes of special friends and their families, Lori and Dave Hazekamp and Ike Middlecamp. Since his return to live in Wolf Lake he had a very special caregiver, Amy Weiss and her husband Tom. Amy was always greeted with "Hello Darlin'!" when she arrived. Ron travelled by foot and rail across the country doing odd jobs for many years. He lived life the way he wanted and had some wild adventures. The stories of his escapades could fill a book. Scrapping metal was his pastime in Pennsylvania where he lived for many years. He also took little old ladies to appointments in his golf cart and donated anything extra that he had to a local church. Usually, he was seen wearing a dew rag. He loved the hills and mountains that surrounded him. Since he returned to Muskegon, he became an avid bird watcher. He loved sitting in his front window watching birds of all kinds and the squirrels who frequented the feeders. Many games of Yahtzee and cribbage were played and watching "rastling" was part of his routine. He also became a Christian and believer in God who forgives though he often felt unworthy of that forgiveness. Ron was predeceased by his father, Johnnie Cunningham; mother, Ruth Briggs; stepfather, Fred Briggs; and his brothers: Newt and Jack Cunningham and their spouses; and sister, Dorothy Sherman; as well as several nieces and nephews. Uncle Ron...Gramps....loved his family and friends and will be missed. He would want to be remembered for his love for family. What little he had, he shared unconditionally. And as he would say, "How bout that!" A GRAVESIDE SERVICE for Ron will be held 1:00 PM Friday, April 22, 2022 at Egelston Twp. Cemetery. MEMORIALS to the Harbor Hospice Foundation will be appreciated. Share memories with the family at their online Guest Book at www.sytsemafh.com Arrangements by The Sytsema Chapel of Sytsema Funeral and Cremation Services, 737 Apple Ave., Muskegon, MI 49442 (231) 726-5210

Ronald Gene &#8220;Gramps&#8221; Cunningham, age 74, passed away Saturday, April 16, 2022. He was born December 28, 1947 in Muskegon to Johnnie and Goldie (Brown) Cunningham. Surviving are many nieces and nephews and great nieces and nephews... View Obituary & Service Information

The family of Ronald G. "Gramps" Cunningham created this Life Tributes page to make it easy to share your memories.

Send flowers to the Cunningham family.