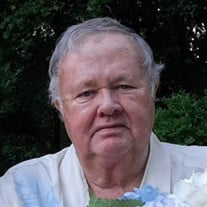 Mr. Ronald G. Czarneke, age 85, passed away peacefully on Friday, September 24, 2021. He was born on March 22, 1936, to John and Eleanor (Hedlund) Czarneke in Muskegon. Ron graduated from Muskegon Senior High in 1954. Shortly after graduating, he enlisted in the United States Army towards the end of the Korean War. After being Honorably Discharged, Ron married Loraine Custer of Muskegon on November 21, 1959. He attended Michigan State University where he graduated with a Bachelor’s Degree in Economics in 1961. He was the President of several hospitals in Michigan, and retired in 1994 from North Ottawa Community Hospital of Grand Haven. Ron loved spending his time boating on Lake Michigan. He enjoyed listening to music and had a wonderful singing voice. Ron was a beloved husband, father, and grandfather and will be missed by his wife Loraine; daughters, Dawn (Mark) Hansen, Ronda Czarneke, and Susan Kesteloot; grandsons, Joshua (Mandy) Isaac and their son, JJ Isaac, Ryan (Jenna) Patrick, and Tyler Patrick; sisters, Susan (Jerry) VanderMolen, and Sharon (Andy) Darien; and many nieces and nephews. He was preceded in death by his parents. A Funeral Service will be held on Tuesday, September 28, at 11am at Forest Park Covenant Church. Visitation with the family will be Monday, September 27, from 5-7pm at the church. In lieu of flowers, memorial contributions in Ron’s memory may be made to Harbor Hospice Foundation. Arrangements entrusted to The Lee Chapel of Sytsema Funeral & Cremation Services, 6291 S. Harvey St., Norton Shores, MI 49444. Please feel free to visit the family’s online guestbook at www.sytsemafh.com.

The family of Ronald G. Czarneke created this Life Tributes page to make it easy to share your memories.

Send flowers to the Czarneke family.