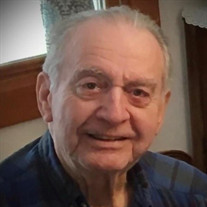 Mr. Ronald Alvin Weihl, Sr, age 83, returned to his Heavenly Father on November 4, 2021, after a brave fight with cancer in North Muskegon, MI. His battle with serious medical issues in recent years showed his courage facing life’s challenges with a smile. Ron was born January 18, 1938 in Waterloo, IL to Herman and Adeline Weihl. In 1956, because he was underage, he snuck across state lines to marry his sweetheart, Shirley Delores Straub who survives him. Together they had four children, who also survive him; Ronald A. (Jean) Weihl, Jr of Whitehall, MI, Randy A (Teresa) Weihl of Twin Lake, MI, Ricky A. (Leanne) Weihl of North Muskegon, MI and Sheryl D. Dotson of Muskegon, MI. He is survived by nine grandchildren; 10 great-grandchildren; and several step grand and great-grandchildren. He is also survived by his brothers-in-law and their spouses and one sister-in-law as well as many nieces and nephews. He was preceded in death by his parents; sister, Evonne Weihl; brother, Herman Weihl; grandson, Ricky Allen Weihl II; and great-grandson, Baby Boy Brown. Throughout his life, Ron achieved many things that many people only dreamed about. He owned many businesses, including a restaurant, gas station and was a land developer. He retired from the City of Muskegon as the operations manager for the Muskegon Mall. He was skilled in many trades, including building & remodeling over 15 homes from start to finish. From digging the basement to roofing and everything in between. He was able to run just about any piece of industrial equipment and taught his boys many skills, which they use in their own lives. Ron had many passions and hobbies such as woodworking, metal detecting, flying model airplanes and also had his pilot’s license. He even flew a paraplane and crashed it (don’t worry, he fared better than the plane!) Ron loved to spend time at his cabin in Canada with his boys and friends. He was a great cook and loved trying new recipes. Ron dedicated his life to service. He held many callings over the years in his church, The Church of Jesus Christ of Latter-day Saints. He served as bishop and also as a counselor in eight different bishoprics. He was a high councilman and served in both the Chicago and Detroit Temples. A Funeral Service will be held 11:00AM Tuesday, November 9, 2021 at The Church of Jesus Christ of Latter-day Saints (1725 W. Giles Rd., North Muskegon, MI 49445). Visitation with the family will held on Monday, November 8 from 2-4PM and 6-8PM at The Lee Chapel of Sytsema Funeral & Cremation Services, 6291 S. Harvey St., Norton Shores, MI 49444, and one hour prior to the service, from 10-11AM at church. For those unable to attend Ron’s funeral service, a recording will be placed on Sytsema Funeral Home’s YouTube channel after the service. Memorial contributions may be directed to a charity of choice. Please feel free to visit the family’s online guestbook at www.sytsemafh.com.

The family of Mr. Ronald A. Weihl Sr created this Life Tributes page to make it easy to share your memories.

Send flowers to the Weihl family.