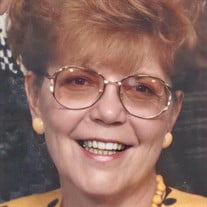 Mrs. Rosemary E. Williams, age 76, passed away peacefully on Tuesday, September 21, 2021 in Muskegon. Rosemary was born on March 23, 1945 to Werner and Dorothy (Paitl) Andre in Muskegon. A lifelong resident of the area, she married the love of her life, Ralph Williams Jr on September 24, 1982 and he preceded her in death in 2018. She was one of the first female postal carriers in Muskegon, and later owned Bavarian Inn, Festival Foods and Roto-Rooter with Ralph before retirement. Rosemary enjoyed volunteering in the community and was a member of Holton American Legion, Lithuanian Club, several area Fraternal Order of the Eagles, and Twin Lake Gun Club. She ran the Twin Lake Civic Association for several years and was always a champion for children and teens in every organization. In her spare time, Rosemary liked listening to Elvis and made cakes of all shapes and sizes for every occasion. Most of all, Rosemary loved the time spent with her cherished children, grandchildren, and great-grandchildren. She will be missed dearly by her children, Ralph (Karen) Williams III, Tracie Conners, Louis (Sara) Branch III, Carole (Troy) Geiger, and Stephanie Williams (fiancé David Zimmerman); 23 grandchildren; 11 great-grandchildren; one great-great-grandson on the way; brothers, Werner (Carol) Andre Jr and Gerald Andre; sister, Shirley McQueen; and many nieces and nephews and their families. Along with her husband, Ralph, Rosemary was also preceded in death by her parents; infant Baby Boy; great-granddaughter, Zoe Branch; brother, James Andre; and sister, Jeannine Vallie. A Memorial Service will be held 2PM, Monday, September 27 at The Lee Chapel of Sytsema Funeral & Cremation Services, 6291 S. Harvey St., Norton Shores, MI 49444. Visitation with the family will be one hour prior to the service, from 1:00-2:00PM. In honor of Rosemary’s giving spirit, please consider volunteering your time at a charity of choice. Please feel free to visit the family’s online guestbook at www.sytsemafh.com.

Mrs. Rosemary E. Williams, age 76, passed away peacefully on Tuesday, September 21, 2021 in Muskegon. Rosemary was born on March 23, 1945 to Werner and Dorothy (Paitl) Andre in Muskegon. A lifelong resident of the area, she married the love... View Obituary & Service Information

The family of Rosemary E. Williams created this Life Tributes page to make it easy to share your memories.

Send flowers to the Williams family.