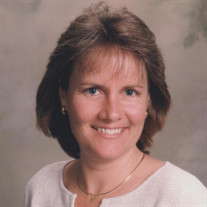 Mrs. Sally Williams, age 62, passed away Thursday, September 16th, 2021, at home with her family. The ninth of twelve children born to Vernon and Mary (Eilers) Parker, Sally Jane entered the world in Muskegon MI, on May 19th, 1959. After tragically losing her only sister at 3 years old, she found great strength and resilience growing up amongst ten brothers, within a tight-knit group of cousins and other extended family, brought together by Sally’s biggest role models, her parents. “Sal” graduated from Whitehall High School in 1977, and just two years later, became a mother herself with the arrival of her first son. Like her parents before, she worked hard so that all her children were always cared for. She spent most of her professional career in the manufacturing industry, and it was there that she met her beloved Terry. When the two wed on October 15th, 1994, she became Sally Williams. Over 27 years of marriage, they fulfilled a lifetime’s worth of memories, including vacations, projects around the house, the co-founding of Terrell Manufacturing Services, lots of laughs, and so much more. Sally maintained a passion for being outdoors - whether it was on the softball field, hiking a trail through the woods, or scouring the shores of the Great Lakes for small stone treasures. Despite beaming with her own natural beauty, she was most comfortable behind the camera, capturing special moments with family, friends, or in nature. She also enjoyed spending time at home, and it was not unusual to find her at play in the kitchen, or curled up in a blanket reading a book. She always made sure holidays were exciting - with homemade decorations, exotic treats, and creative costumes. Everything she did, she did for her family - with her grandkids often taking center stage. Her unmatched humor, sharp wit, kind heart, and beautiful smile will be forever missed. Sally is survived by her loving husband, Terry; three children: Berton (Kathy) Falbe of Fremont, Corey Paggeot of Las Vegas, and Anna (Adam) Judd of Norton Shores; Seven grandchildren: Karston, Kameron, Austin, Andrew, Aubrey, Ryer, and Emma; Great-grandson, Canelo. She is also survived by brothers: Dan, Jim, Charlie, Tom, Bill, John, Ken, Russ, Fred, Sam, and their families - as well as many nieces, nephews, cousins, and friends. She was preceded in death by her parents, Vernon and Mary: and sister, Peggy. A memorial service will be held 11:00 AM Friday, October 1, 2021, at St. James Catholic Church in Montague. Interment will take place in Mt. Calvary Cemetery. Please sign the family’s online guestbook at www.sytsemafh.com.

Mrs. Sally Williams, age 62, passed away Thursday, September 16th, 2021, at home with her family. The ninth of twelve children born to Vernon and Mary (Eilers) Parker, Sally Jane entered the world in Muskegon MI, on May 19th, 1959. After tragically... View Obituary & Service Information

The family of Sally Williams created this Life Tributes page to make it easy to share your memories.

Send flowers to the Williams family.