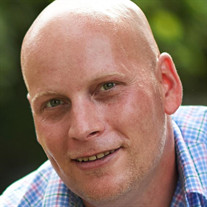 With great sadness, the Klemp family announces the passing of Sander Cyan Klemp, father, son, brother, uncle, and friend, due to complications after a hunting accident in December 2020. Sander passed Thursday October 28th, 2021 at age 38, with his mother, sister, and girlfriend by his side. Growing up on the shores of Lake Michigan, Sander could often be found catching waves with his brother, cousin, and friends, fishing, or hunting in the woods behind his parent’s house. Sander also enjoyed books, always wondering and searching for a better understanding of the world around him, including theoretical physics and quantum theory. He was fascinated with WW2 and the men and women who served our country. In recent years, his main focus was co-parenting his treasured daughter, Tatum, with whom he enjoyed having singalongs with during rides in his truck and swimming with at the Muskegon Yacht Club. Despite his life-changing injury, Sander continued his work as a metallurgical sales consultant for Davis Alloys. He was the third child of Marcia (Zuidema) and Theodore "Ted" Klemp III. Sander had worked as his Dad's apprentice at Cayenne Systems, learning a hands-on approach to foundry metallurgy and investment casting. Sander is survived by his daughter, Tatum Rose Klemp, steadfast partner, Annie Fish, devoted mother, Marcia, his best friend and sister, Meagan (Mike) Gassmann, nephew, Teddy Gassmann, his brother, Crispin (Michele) Klemp, and many admiring aunts, uncles, and cousins. He will also be missed by his dear friend, Ryan and superb caregiver, Sherry. Sander will be remembered for his pride in carrying on his Dad's legacy of metallurgical excellence, his love for his daughter, his quest for knowledge, and his gift for conversation. Proceeded in death by father, Theodore Klemp III, grandparents, Ted and Mary Klemp Jr., and John and Stella Zuidema. A celebration of his incredible, though way too short life, will be planned at a future date. In lieu of flowers, donations can be made to the Tatum Rose Klemp Tuition Fund at [email protected] Please sign the family’s online guestbook at www.sytsemafh.com.

With great sadness, the Klemp family announces the passing of Sander Cyan Klemp, father, son, brother, uncle, and friend, due to complications after a hunting accident in December 2020. Sander passed Thursday October 28th, 2021 at age 38, with... View Obituary & Service Information

The family of Sander Cyan Klemp created this Life Tributes page to make it easy to share your memories.

With great sadness, the Klemp family announces the passing of...

Send flowers to the Klemp family.