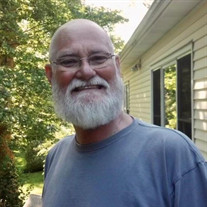 Stephen Carter Thomas, age 72, of Muskegon, Michigan died on January 26th, 2022 after suffering an aortic aneurysm on September 13th. He began to make a recovery, but unfortunately complications continued to plague him and he made an escape early on the morning of his birthday. He was born on January 26th, 1950 in Santa Paula, California to Silver and Rollie Thomas. He was the youngest of three children with an older brother, Dean and sister, Lisa. He grew up running around orange orchards and the love of southern California never left him. After graduating from high school he had many jobs. He was a paramedic, a ranch hand, and a psychiatric technician at the state run psychiatric hospital in Camarilla. While he was working at the state hospital he made lifelong friends with Lance and Maureen Burt. Maureen’s little sister, Michele Campbell, was introduced to him on a vacation to California and a lifelong love began. He followed Michele back to Michigan and worked for her father, Jim Campbell, as a rod man in his surveyor business. After they married, on February 12, 1977, he worked as a chimney sweep, a supervisor at Eagle Ottawa Tannery, he completed his Bachelor degree, sold insurance, finished a Masters in Divinity, was ordained, became a pastor, escaped the New York Classis, taught yoga, became a Mennonite pastor, and then became Pagan. He was a lifelong writer and musician. He was able to play almost any instrument after a few minutes and did it all by ear. He had a beautiful voice that was a joy to listen to and wrote songs that many people loved. Steve had five kids that he loved endlessly. Shona, Chris, Amanda, Jennie, and Peter were so important to him and being a good dad was something that he valued. He played, teased, surprised, comforted and was the most amazing father. He taught his kids to love the beach and simple things. He found excitement where there was none and made a big deal out of small things. He created magic and his smile was an irresistible invitation to suspend disbelief and enjoy it with him. Later in life, he lived that love over again with his grandkids: Rodney, Josh, Jack, Michele, Grace, Morgan, Simon, Molly, and Jeffrey. Fishing for whales in the rain barrel, sharks in the carpet, nicknames, and a whole new magic began again. The true center of his life was his wife, Michele. He loved her endlessly and loved to make her laugh, to go on adventures with her, to play guitar and sing with her, read to her and spoil her. His Princess was never far from his thoughts. He is preceded in death by his parents, Silver Dills and Rollie Thomas, his beloved in-laws Mary and James Campbell, his brother Dean Thomas. He is survived by his wife, Michele Thomas. His children: Shona (Neal) Hamilton, Chris Thomas, Amanda (Nate) Westbrook, Jennie Harland, Peter (Sara) Thomas. We are bereft. A memorial service will be announced at a later date.

Stephen Carter Thomas, age 72, of Muskegon, Michigan died on January 26th, 2022 after suffering an aortic aneurysm on September 13th. He began to make a recovery, but unfortunately complications continued to plague him and he made an escape... View Obituary & Service Information

The family of Stephen Carter Thomas created this Life Tributes page to make it easy to share your memories.

Send flowers to the Thomas family.