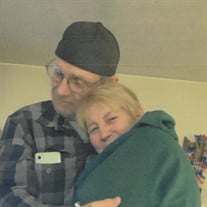 Steven James Brooks, Sr., age 67, passed away very suddenly on Sunday, September 19, 2021. He was born June 2, 1954 in Muskegon to Jimmie A. and Dorothy M. (Patarozzi) Brooks and lived his entire life in the area. On February 23, 1974, he married Joanne M. Johnson in Muskegon. Steven worked as a machinist for Sealed Power Corp and Challenge Machine. He was a team leader and union steward at TGW where he worked over 20 years prior to his retirement in 2016. Steven was a computer geek and enjoyed anything to do with computers. He loved Jeeps and his tagline was “It’s a Jeep thing.” He enjoyed camping and spending time with his family and grandchildren, especially at Silver Lake. Survivors include his soulmate and loving wife of 47 years, and his “princess,” Joanne M. Brooks; 4 children, Stefani (Michael) Giddings, Jamie (Steve Parrish) Brooks, Steve Brooks, Jr., Jillian (Wesley) Russell; 10 grandchildren, Tyler, Taylor, Adam, Xavier, Taya, Carter, Mercedes, Kaden, Peyton, Princeton; 1 brother, Mike Brooks; 1 sister, Debi (Mark) Huyser; special aunt, Lee Heinbaugh; and many nieces, nephews, cousins, in-laws and close friends. He was preceded in death by his parents and 1 brother, David Brooks. A Celebration of Life will be held at a later date. Arrangements by The Sytsema Chapel of Sytsema Funeral & Cremation Services, 737 Apple Ave, Muskegon, MI 49442. Sign the online guestbook at www.sytsemafh.com

The family of Steven James Brooks Sr. created this Life Tributes page to make it easy to share your memories.

Send flowers to the Brooks family.