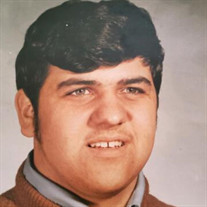 Steven K. Johnson, age 68, passed away at Mercy Hospital on January 18, 2022. He was born on August 11, 1953 to Gordon and Dorothy (Freeman) Johnson in Elkhart, IN. He served his country in the U.S. Army. Steve worked as a diesel mechanic... View Obituary & Service Information

The family of Steven K. Johnson created this Life Tributes page to make it easy to share your memories.