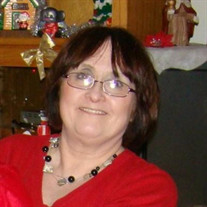 Susan Kaye DeWalt, age 70, loving mother, grandmother, and sister, passed away unexpectedly Tuesday, November 9, 2021. She was born June 23, 1951 in St. Paul, Minnesota to Jerome and Muriel (Zager) Gustafson. Susan is survived by her son, Jason (Seleana) Gustafson; three grandchildren: Alizaya, Austin, and Brielle; and two siblings: Pamela Jo (Jeffrey Schmiedeck) Gustafson and William Arthur (Marijo) Gustafson. She was preceded in death by her parents and sister, Mary Beth Nolan, who just passed away earlier this year. She is also survived by a brother-in-law, Tom Nolan; 18 cousins; 9 nieces and nephews; many friends; and her fur babies: Daisey and Izzy Ming. Her cousin, Ann Zager, who lived in the Gustafson household periodically, considers her a sister. She graduated from Prescott High School in 1969. Susan was always a hard worker and started her employment by detasseling corn and worked many other part-time jobs. After high school, she attended the University of Wisconsin—River Falls for two years. She enlisted in the Army and served our country for four years. After the Army, she moved to Muskegon, Michigan with her infant son, Jason. She became a medical secretary and worked in the field her entire career. She retired in 2011. Susan enjoyed simple things and was most happy playing Bingo. She was delighted when she returned to Wisconsin to be with family and enjoy Old Dutch potato chips. She treasured her mother’s dishes and used them often in memory of her mother. Family recipes were important to her, especially Grandma Zager’s fried chicken and Cinnamon Stick cookies from the Gustafson recipe book. She loved being with her 3 grandchildren. Susan suffered greatly with several autoimmune diseases, as did her recently deceased sister, Mary Beth Nolan. Despite her suffering she was always concerned about her son Jason and her three grandchildren. Their needs always came first. Jason and Susan didn’t have the most “normal” mother and son relationship, but it was THEIR relationship. She hated having photos taken of her, but Jason would take every opportunity to take them, as well as video, and would post them to Facebook. We don’t know what she disliked more, Donald Trump or the videos she stumbled across. Susan was also known as DJ Sassy Susan to some, mostly on Facebook. The name fit her perfectly. We will miss her infectious laugh, her silly quirks, and most of all, the shoulder to lean on as we get through the journey called “Life”. She is missed dearly. A Celebration of Susan’s Life will be held from 5-7 PM Saturday, November 20, 2021 at The Lee Chapel Family Center of Sytsema Funeral and Cremation Services, 6291 S. Harvey St., Norton Shores, MI 49444 (231) 798-1100. In lieu of flowers, please consider a donation to The Autoimmune Association, 19176 Hall Road, Suite 130, Clinton Township, MI 48038. Share memories with the family at their online Guest Book at www.sytsemafh.com

The family of Susan Kaye DeWalt created this Life Tributes page to make it easy to share your memories.

Send flowers to the DeWalt family.