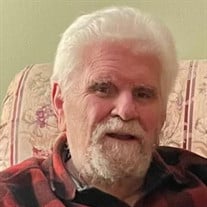 On January 31, 2022 (Happy Birthday, Karen), Christopher was waiting for his grandpa to join him in heaven. T arrived and together they walked into the woods to start their journey together – imagine that reunion! T was the perfect example of what a man should be. T was born February 27, 1942 – a birthdate he shared with Christopher. He graduated from Muskegon Catholic Central in 1960 and enlisted in the U.S. Air Force where he served 1960-64. After his service time, he married Merilee Bour in Muskegon on August 4, 1965. T worked as a project engineer at Howmet Corporation and retired in 1998 after 38 years of service. T loved the times he spent hunting with Mark, Tony and Mike and staying at the bunkhouse. Mark got T interested in scraping metal. He had a little metal route he went on every Wednesday. People would wait to see his truck coming and stop him. He had made many friends at Padnos through the years. We would drive around Muskegon and he would say, “I did that job here and did this one there.” All around, T had projects he did for friends and family. T never expected anything but a “thank you” and his best project was helping Mark build his house. They bounced off each other so good and could anticipate each other’s move so well. They were not only father and son, but great friends as well. T was very proud of the way Kim handled her life with such grace. It was that same dignity and grace, that allowed Kim’s CNA skills to kick-in and be there for her dad. Thank you, Kim and Kelly for that! T would often say, “The greatest loss of our life was losing our grandson, Christopher.” T was a fierce protector of his family, especially when it came to Merilee, Kim and Emma. T was preceded in death by his parents, Jim and Marie Fraser; step-mother, Sophia Kobza Fraser; and the “Top 6”, Jim and Barb Fraser, Mary and Bob Vanderwest, and John and Betty Pacyga. Survivors include his loving wife, Merilee Fraser; his son, Mark and Ann Fraser; his daughter, Kim and Dave Wensink; his amazing granddaughter, Emma; granddaughter, Ariel and Nate Goodman; grandson, Bob Ahern; brothers, Mike and Marge Fraser, Tony and Starr Fraser (T and Merilee completed the “Bottom 6”); Merilee’s family, Mike and Gloria Russell, Pam and Jerry Tanis, Tim and Barb Bour, Bill and Kathy Bour; and the family pet Johnny Sparkle. Special “Thank You” to Matt and Whitney at Mercy ER and the great staff for the care and compassion he received at Mercy – along with Harbor Hospice. Well, T – it’s been a journey for us, see you later – until then, thank you for the blessings! A Celebration of Life will be held 4-7 PM Monday, February 7, 2022 at The Sytsema Chapel of Sytsema Funeral & Cremation Services, 737 Apple Avenue, Muskegon, MI 49442. Memorial Contributions may be directed to the Harbor Hospice Foundation. Sign the online guestbook at www.sytsemafh.com

On January 31, 2022 (Happy Birthday, Karen), Christopher was waiting for his grandpa to join him in heaven. T arrived and together they walked into the woods to start their journey together &#8211; imagine that reunion! T was the perfect example... View Obituary & Service Information

The family of Terence "T" Fraser created this Life Tributes page to make it easy to share your memories.

Send flowers to the Fraser family.