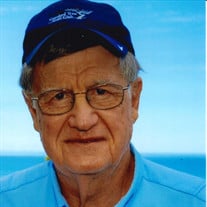 Terry Lee Katt, age 82, of Spring Lake passed away Friday, November 19, 2021, at Sanctuary of The Oaks. He was born May 5, 1939, in Grand Rapids, MI to Otto George and Lillian Gertrude (Norman) Katt. He married Linda who he met at Grand Haven... View Obituary & Service Information

The family of Terry Lee Katt created this Life Tributes page to make it easy to share your memories.

Send flowers to the Katt family.