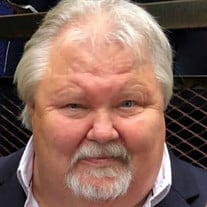 Terry L. Lindstrom, age 74, passed away Sunday, May 1, 2022. He was born July 7, 1947, in Escanaba, Michigan, to Lloyd and Susan (Parrett) Lindstrom. On April 27, 1968, Terry married Mary Anderson, and were blessed with 54 years of marriage together. Terry spent 44 years as an insurance agent, helping people throughout West Michigan. He was also a North Muskegon volunteer fireman for years and a coach. Terry had a love for hunting, the Red Wings, his U.P. deer camp and especially his family. He was a proud Yooper. Terry is survived by his wife, Mary; daughter, Robin (Scott) Smith; son, Randy; grandchildren, Jake (Sydney) and Hannah; great-grandson, Leo; and brother, William Lindstrom. VISITATION will be held on Monday, May 9, 2022, from 5-8:00 pm at The Lee Chapel of Sytsema Funeral & Cremation Services, 6291 S. Harvey St., Norton Shores, MI 49444. A private family service will be held at a later date. Memorial contributions in Terry’s honor can be made to the Salvation Army. Share memories with the family online at www.sytsemafh.com.

The family of Terry L. Lindstrom created this Life Tributes page to make it easy to share your memories.

Send flowers to the Lindstrom family.