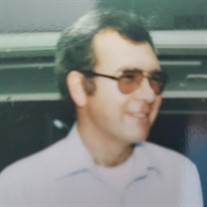 Thomas P. Alman, 79, passed away on November 25, 2021. Born October 22, 1942, Tom was the oldest of three sons born to Paul and Bonnie (Sandel) Alman of Grand Haven, Michigan. Tom grew up in Grand Haven and graduated from Grand Haven Senior High. He enlisted in the U.S. Army and began his term of service on New Year's Day in 1961. He was stationed in Korea, and after serving his country, was Honorably Discharged in 1964. Tom had a number of jobs throughout his life, but the one he was most proud of was that of inspector for Underwriters Laboratories. Tom met his future wife, Emily, in 1973. They married in 1978 and moved to Texas, where Tom took a job at Daniel Woodhead. Tom loved tinkering with the mechanics of how things worked and together with his wife, opened a small appliance repair shop in El Paso, where they lived for several years. They later moved back to Grand Haven where he was employed by Automatic Spring until he retired in 2007. In his spare time, Tom enjoyed fishing the small streams near his home. Tom is survived by his wife, Emily (Ewers) Alman, two stepdaughters, Sheila Ewers, Marlene (Tim) Daniels, and a brother, Lee (Gail) Alman. He was preceded in death by his parents, Paul and Bonnie Alman and a brother, Brad Alman. Condolences may be expressed to the family at www.sytsemafh.com.

The family of Thomas P. "Tom" Alman created this Life Tributes page to make it easy to share your memories.

Send flowers to the Alman family.