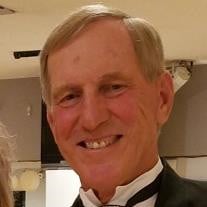 Thomas J. Cwynar, age 75, passed away on November 27, 2021, in Columbia MO after a courageous battle with cancer. He was born in Muskegon September 29, 1946 to John and Joan (Gortat) Cwynar. A graduate of Muskegon Catholic Central, he served his country in the US Army and was a Vietnam veteran. Following military service, he attained baccalaureate and master’s degrees in English and Literature from Michigan State University and University of Michigan. Tom was a talented wordsmith, did freelance writing and worked at the Muskegon Chronicle prior to moving to Missouri. During his residence in Missouri, he served as chief editor of the Missouri Conservationist magazine until retirement. An avid outdoorsman, he enjoyed golfing, fishing, hunting, and gardening. Tom’s great source of energy for the past several years was in ballroom dancing. He was not only an enthusiastic participant, he shared his excitement and love of dancing by providing dance instruction and entering competitions. He was a member and recognized leader for several dance clubs in the area. Survivors are his wife, Debbie Calvin; mother, Joan Panyrek; sister, Patricia Fowler; stepsister, Patricia Spann; nephews, Jay and Kevin (Jill) Fethke; and many extended family members and friends. He was preceded in death by his father, son, grandparents, and nephew. He will be fondly remembered and is dearly missed. Following his wishes, there will be no memorial service. Private interment will take place in St. Mary’s Cemetery. Arrangements by The Lee Chapel of Sytsema Funeral & Cremation Services, 6291 S. Harvey St., Norton Shores, MI 49444. Please feel free to share a memory with the family online at www.sytsemafh.com.

Thomas J. Cwynar, age 75, passed away on November 27, 2021, in Columbia MO after a courageous battle with cancer. He was born in Muskegon September 29, 1946 to John and Joan (Gortat) Cwynar. A graduate of Muskegon Catholic Central, he served... View Obituary & Service Information

The family of Thomas J. Cwynar created this Life Tributes page to make it easy to share your memories.

Send flowers to the Cwynar family.