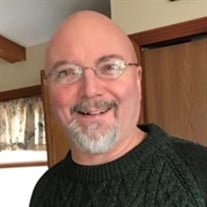 Timothy Lee Versalle went to be with the Lord on Friday, December 24, 2021, at the age of 58. He was greeted in heaven by his mother, Joan Audrey Hoolihan, brother, Jeffery Versalle, and grandma, Janice Bumgardner. Tim spent his life’s work in the medical field beginning with his military service in the U.S. Navy. After spending several years in Washington, DC, he moved back to the Muskegon area where he met the love of his life, Cheryl, and they married on December 17, 2004. Tim was funny, loved cooking, the outdoors, and could have a conversation with anyone. He was known as the “grill master” of the family and could always be relied on to grill the best steaks and burgers. He is survived by his wife, Cheryl; stepson, Chris Knoll; father and mother-in-law, David and Ginny Chase; sister and brother-in-law, Ted and Denise Kurdziel; brother, Michael (spouse, Judith) Versalle; sister, Jodie Versalle; grandfather, Charles Bumgardner; nephew, Christopher (spouse, Kate) Versalle; and niece, Dr. Marissa (spouse, Brandon Gaddis) Versalle. Tim will be greatly missed by his family and friends. He will forever be in our hearts, but we know that someday we will be able to see and hug him again. A Memorial Service will be held 12:00 PM Thursday, January 6, 2022 at The Walburn Chapel of Sytsema Funeral & Cremation Services, 1547 W Sherman Blvd, Muskegon, MI 49441 with Rev. Dr. William J. Rudd officiating. Visitation will be held one hour prior to the service. Military Honors will be offered by the US Navy Great Lakes Detail from Battle Creek and the Muskegon County Council of Veterans of Foreign Wars. For those wishing to make an expression of sympathy, please consider the Wounded Warrior Project. Sign the guestbook online at www.sytsemafh.com

Timothy Lee Versalle went to be with the Lord on Friday, December 24, 2021, at the age of 58. He was greeted in heaven by his mother, Joan Audrey Hoolihan, brother, Jeffery Versalle, and grandma, Janice Bumgardner. Tim spent his life&#8217;s... View Obituary & Service Information

The family of Timothy Lee Versalle created this Life Tributes page to make it easy to share your memories.

Timothy Lee Versalle went to be with the Lord on Friday, December...

Send flowers to the Versalle family.