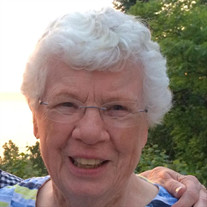 Virginia “Ginny” Bender Guy, age 89, of Grand Haven, Michigan, died on October 20, 2021 following a brief illness. She was born on May 17, 1932 in Grand Rapids, Michigan, to Theodore and Marion (Gavett) Bender. Ginny graduated from East Grand Rapids High School in 1950 and then attended the University of Michigan, earning a bachelor’s degree in Education in 1954. After college, Ginny worked as a teacher, first at University of Michigan hospital in Ann Arbor, MI, then in the Washington, D.C. area. In 1961, Ginny married Herbert Guy, a native of Vero Beach, Florida. Ginny and Herb moved to Severna Park, Maryland, where Ginny was an active member of St. Martins in-the-Field Episcopal Church; a volunteer for the Anne Arundel Medical Center Auxiliary; and a teacher of English as a second language at the Anne Arundel County Senior Center, all while raising her two children. In 1990, Ginny and Herb moved to Michigan - first to Spring Lake and then to Grand Haven. While in Michigan, she was a member of St. John’s Episcopal Church and then Grace Episcopal Church in Holland, Michigan; served on the North Ottawa Community Health System Board of Trustees; made excellent use of their season football tickets at Michigan Stadium; and, more than anything, savored every minute spent at her beloved cottage on Lake Michigan. Ginny was predeceased by her husband of almost 54 years, Herb, her parents, and her brother Charlie. She is survived by her children Martha (John) Gork of Grand Haven and Bill (Cheri) Guy of Severna Park. She is also survived by her grandchildren Katie Parks, James (Bethany) Gork, and Maddie, Jake, and Luke Guy, as well as great-grandchildren Jaxon and Theodora Gork. A memorial service will be held at 2:00 p.m. Monday, December 20, 2021, at Grace Episcopal Church 555 Michigan Ave., Holland, MI 49423. Arrangements entrusted to The VanZantwick Chapel of Sytsema Funeral & Cremation Services, 620 Washington Ave, Grand Haven, MI 49417. Share memories with the family at their online guest book at www.sytsemafh.com. In lieu of flowers the family suggests a memorial contribution to the Ottawa County Parks Foundation, Inc. at P.O. Box 314, West Olive, Michigan 49460 or Grace Episcopal Church at 555 Michigan Avenue, Holland, Michigan 49423. Go Blue!!!

The family of Virginia "Ginny" Bender Guy created this Life Tributes page to make it easy to share your memories.

Send flowers to the Guy family.