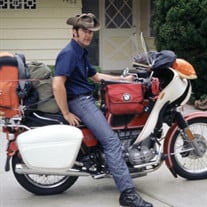 Mr. Warner Albert Johnson Jr., age 85, passed away Monday, March 14, 2022 at his home in Spring Lake, Michigan. He was born in Grand Haven, Michigan on December 5, 1936 to Warner A. and Katherine F. (Groth) Johnson Sr. On June 12, 1959, Warner married the former Rosemarie E. Remwolt in Muskegon and they had three children. Warner earned his Master of Economics from Michigan State University where he was on the fencing team and continued his education at Western Michigan University where he earned his Doctorate in School Administration. He served in many capacities at several schools, including Orchard View High School 12th grade Civics and drivers training, Harbor Creek Public School 9th grade Civics and drivers training, and Mona Shores Public Schools, Math, Economics, Geography, Remedial Reading, and drivers training. He also worked as an Education Specialist in drug treatment programs, specializing his services to Native Americans. Later in life, he worked as a foreman for the Department of Labor and Construction before starting his own business, West Michigan Building Inc. Warner, although driven by his career, had a wandering heart and was able to fill those desires with long motorcycle trips atop his prized BMW motorcycle. His travels took him all over the United States, but some of his more memorable travels were to the Upper Peninsula of Michigan, Wyoming, California, and Thompson Pass, Alaska. He also enjoyed traveling throughout Canada, and his favorite place to visit was the Island of St. Pierre and Miquelon, off the coast of Newfoundland. Warner was self-taught and fluent in French, a language he loved. He was also a believer in Jesus, and felt he was marked by God through a stigmata. Warner is survived by his children, Brenda Clifford, Ken Johnson, and Eric Johnson; three grandchildren, Ryan Clifford, Kyle Johnson, and Claire Johnson; two brothers, Ronald (Darlene) Johnson and Donald (Julie) Johnson; and one sister, Adelle (Dick) Aaberg. He was preceded in death by his wife of 62 years, Rosemarie. SERVICES for Warner will be 1:00 PM Thursday March 31, 2022 at The Lee Chapel of Sytsema Funeral & Cremation Services, 6291 Harvey St., Norton Shores, MI 49444 with a time to meet with his family immediately following his service. You may sign his online guestbook at www.sytsemafh.com

The family of Warner Albert Johnson Jr. created this Life Tributes page to make it easy to share your memories.