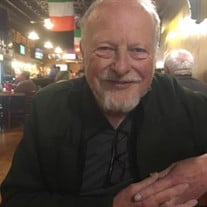 Wayne Richard Pribbernow went home to Jesus on December 1, 2021 at age 80. Wayne was born to Richard and Mildred Pribbernow on February 10, 1941 in St. Joseph, Michigan. As a child, Wayne worked on his family farm, loved being outdoors, and loved swimming in Lake Michigan. In addition to being a dedicated and loving father and grandfather, Wayne also loved history, reading, the great outdoors, hunting, and ancestry. Throughout his entire life, he held an unwavering faith in God, which he shared with those who surrounded him through relationships and ministry. Wayne joins his parents, Richard and Mildred Pribbernow, siblings Roy Pribbernow and Norma Krause, children Joseph Anthony and Alicia Marie Pribbernow, in Heaven. He is survived by his sister, Nina (and Dick) Rynberg. His wife, Sharon Pribbernow, children Katherine (Kitty) Pribbernow-Wolf, Richard (and Trisha) Pribbernow, Jill (and Rodney) Lehman, Lorrie Kruzick, Christina (and Jason) Byrd, and Nicole Pribbernow. Grandchildren: Lyndsi, Kelsey, Allen (and Maria), Jamie, Ethan, Grant, Owen, and Audrey. Great Grandchildren: Ares and Cooper. Wayne’s Life Verse: Isaiah 40:30-31 30 Even youths grow tired and weary, and young men stumble and fall; 31 but those who hope in the Lord will renew their strength. They will soar on wings like eagles; they will run and not grow weary; they will walk and not be faint. Memorial Reception and Visitation planned at Evangelical Covenant Church of Whitehall from 2:00 – 5:00 PM on Saturday, December 4, 2021. Address: 900 Warner St, Whitehall, MI 49461 In lieu of flowers, please make donations in his memory to Mercy Ships. Your gift multiplies in impact to bring free life-changing surgery and improved healthcare to the world’s forgotten poor. Online: www.MercyShips.org | By mail: PO Box 1930, Lindale, TX 75771

Wayne Richard Pribbernow went home to Jesus on December 1, 2021 at age 80. Wayne was born to Richard and Mildred Pribbernow on February 10, 1941 in St. Joseph, Michigan. As a child, Wayne worked on his family farm, loved being outdoors, and... View Obituary & Service Information

The family of Wayne R. Pribbernow created this Life Tributes page to make it easy to share your memories.

Send flowers to the Pribbernow family.