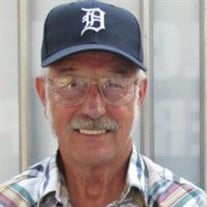 William Robert Balcom, age 82, passed away in Muskegon on Friday, January 14, 2022. William was born on March 18, 1939, to his parents, William and Ruth (Selig) Balcom. After graduating from Berrien Springs High School and finishing trade school he worked as a plumber and fitter for General Motors/Delphi Technologies and was also a part of the Plumbers and Fitters Local #154 in Muskegon. He married the former Nancy Brown on June 20, 1959, and they spent 50 wonderful years together until she preceded him in death in 2009. William was an avid outdoorsman; he loved hunting and spent many summers camping at Hart Lake. When he was younger he enjoyed playing fast pitch softball and riding horses in the rodeo, but more recently enjoyed watching NASCAR and MSU Sports. He was very proud of his 55’ and 56’ Chevy Bel Airs, and he travelled to car shows all over the Midwest to show them off. William could often be found tinkering in his garage, but rarely completed anything. More than anything, he loved spending time with his family, especially at family reunions. William will be lovingly remembered by his girlfriend of 12 years, Lin Sherriff; four children: Dawn (Jerry) Lewis, William (Laurie) Balcom, Michelle Macomber, and Shane (Lindsey) Balcom; 21 grandchildren: Kristynne, Jesse, Rachel, Danielle, Zack, Randy, Tyler, Travis, William, Andrew, Amanda, Robert, Nicholas, Colt, Breonna, Chelcie, Ariel, Bret, Taylor, Kaylee, and Sawyer; 27 great-grandchildren; and four siblings: Chet Balcom, Renea Roberson, Dan Balcom, and Rick Balcom. He was preceded in death by his parents; wife, Nancy; brother, Larry Balcom; sister, Helen Balcom; and son in-law, Ron Macomber. The family would like to send special thanks to William’s guardian Angel, Brent Anderson, for saving William’s life in December of 2020, and to the staff at Mercy Hospital for their continued care. A FUNERAL will be taking place on Wednesday, January 19, at 11:00 AM at The Lee Chapel of Sytsema Funeral & Cremation Services (6291 Harvey St., Norton Shores, MI, 49444), with the VISITATION taking place the night prior from 5:00-7:00 PM, as well as an hour prior to the funeral. Please sign the family’s online guestbook at sytsemafh.com.

The family of William R. Balcom created this Life Tributes page to make it easy to share your memories.

William Robert Balcom, age 82, passed away in Muskegon on Friday,...

Send flowers to the Balcom family.