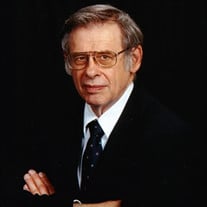 William John Cole, age 87, died on April 11, 2022 at his home in Whitehall, MI. John (or Bill, as he was known to his family in North Carolina) was born on October 25, 1934 to Willard Glover Cole and Mary Francis Donnelly in Banner Elk, NC, the younger of two children. He is survived by his elder sister, Mary Jo (Cole) Burnette of Raleigh, NC, his wife of 54 years, Judy (Katz) Cole, and his children from his blended family: his daughter, Carilee (Tom) Moran of Fenton, MI, and his sons, Randal (Ann Marie) Cole of Lorain, OH, Kelly (Lena) Cole of Kentucky, Adam Cole of Menlo Park, CA and David (Nicolette) Cole of Three Rivers, MI, as well as seven grandchildren and two great-grandchildren. John was the valedictorian of his 1952 graduating class at Whiteville High School in North Carolina. He attended Duke University, graduating in 1956 with a B.S. in Chemistry. He subsequently studied at the University of Wisconsin, achieving a Master’s in Chemistry in 1958. After a short stint at General Tire and Rubber Co. in Akron, OH, he worked a full career of 42 years as a chemical engineer at Brunswick Corporation in Muskegon, MI, specializing in coatings and finishes for bowling pins and lanes, and manufacturing processes for high-end bowling balls. John was a modern-day Renaissance man: interested in everything, and skilled at a wide array of endeavors. His three most serious hobbies were astronomy, music, and homebuilding. With his wife, Judy, one or another of his children, and a high-powered homebuilt telescope, he chased total solar eclipses at locations ranging from Newfoundland, Canada (1970) to St Louis, MO (2017). John’s love of music began with learning to play the clarinet in high school. In college, John played in the Duke Blue Devils Marching Band, and often recounted with pride the many pranks he took part in as a member. He continued to work at music in all forms, playing in the pit orchestra for musicals, participating in the West Michigan Concert Winds for decades, and later, in an ensemble sponsored by the Blue Lake Fine Arts Camp, an institution which John helped establish in the 1960s. Throughout his decades in Montague, MI, he provided musical background for services at White Lake United Methodist and other local churches. In 1973, John conceived a plan to build an octagonal pole-construction home on the banks of Flower Creek, in the middle of a beautiful, mature forest north of Montague. He learned every building skill that could be executed by one man alone, accepting help only for the heaviest work. The family moved into the home in 1977, and John and Judy lived there until relocating to Whitehall in 2016. Late in life, he was instrumental in encouraging the White Lakes Fine Arts Council to build and place a unique sculpture, a Szilassi polyhedron, along the White Lake Path in Whitehall. It stands today with several other art installations as an anonymous monument to his persistence. Three of John’s passions have been highlighted here, but he was insatiably curious about everything, whether in the natural world, the world of engineering, the arts, or physical challenges - from swimming Lake Waccamaw in NC with John Ward and Lee Greer in 1953, to hiking the Jordan River Trail in northern MI at age 70. He was a quiet man who could comfortably talk to anyone about anything, and he applied his legendary sense of humor to almost every situation. He was unquenchably determined, a man who did not believe in the word “impossible.” He will be missed forever. William John Cole’s life will be celebrated at a memorial service at White Lake United Methodist Church (8555 Cook St., Montague, MI 49437) on Saturday, May 21, 2022 at 11:00 AM. Visiting hours for those who wish to pay their respects will take place from 6-8 PM on Friday, May 20, 2022 at The Sytsema Chapel of Sytsema Funeral and Cremation Services, 737 Apple Ave., Muskegon, MI 49442 (231) 726-5210. John’s mortal remains were cremated, per his wishes, and will be scattered by family in a place he loved well. The family requests in lieu of flowers, that donations be made to the Blue Lake Fine Arts Camp, 300 E. Crystal Lake, Twin Lake, MI 49457; https://donate.bluelake.org/camp or the White Lake Community Fund, 425 W. Western Avenue Suite 200, Muskegon, MI 49440; https://muskegonfoundation.org/funds/white-lake-community-fund/ Share memories with the family at their online Guest Book at www.sytsemafh.com

William John Cole, age 87, died on April 11, 2022 at his home in Whitehall, MI. John (or Bill, as he was known to his family in North Carolina) was born on October 25, 1934 to Willard Glover Cole and Mary Francis Donnelly in Banner Elk, NC,... View Obituary & Service Information

The family of William J. Cole created this Life Tributes page to make it easy to share your memories.

Send flowers to the Cole family.