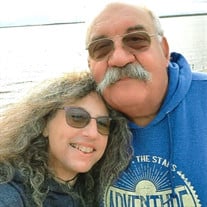 William G. “Bill” Colson, age 72, met his Lord and Savior on Sunday, October 24, 2021 after courageously battling cancer for five years. He was born on January 4, 1949 to Albert and Ann (Mathis) Colson in Metz, France and made his way to Michigan in 1954. He was a proud veteran, serving his country for 6 years in the U.S Navy during the Vietnam Era. He graduated from Northwestern Michigan College with an associates degree in Criminal Justice. He used his education to obtain a career as a corrections officer in the State of Michigan for 10 years until 1999. Bill then continued working as an EMT for Reading Emergency Unit until he retired in 2009. On June 20, 1989 he married the love of his life, the former Michelle Berman in Jackson, MI. Together they cherished 32 years full of love, laughter and witty banter. William and Michelle were inseparable and enjoyed participating in most things together. They were highly involved in their community and helped at the Taste of Muskegon, the Salmon fest, Irish fest and numerous others. He truly enjoyed volunteering and giving back to his community and caring for those in need. Bill was also a member of the American Legion and the National Association of EMT’s. Above all things, he loved his wife unconditionally, his children and grandchildren whole-heartedly and his friends dearly. He will always be remembered for his witty and charming personality and love for Godzilla. His tender-loving and caring spirit will truly be missed by all who knew him. He is survived by his wife, Michelle Colson; 5 children, Nicholas Colson, Myra (Adam) LaSure, Joshua (Kaila) Colson, Chandra (Rick) Colson and Rebecca (Alex Matt) Colson; 8 grandchildren, Wyatt, Liam, Alli, Ranson, Zander, Neliel, Isaiah and Sage; and brother, Raymond (Lisa) Colson. He is preceded in death by his parents; mother-in-law, Sharon Ballard; and father-in-law, Michael Berman. Arrangements entrusted to The Sytsema Chapel of Sytsema Funeral & Cremation Services, 737 E. Apple Ave., Muskegon, MI 49442. Memorial Contributions in Bill’s honor can be made directly to Hospice of N. Ottawa Community, the American Cancer Society, or his family. Please share memories with the family at www.sytsemafh.com.

The family of William G. "Bill" Colson created this Life Tributes page to make it easy to share your memories.

Send flowers to the Colson family.