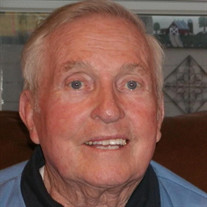 Mr. William “Bill” Kennedy, age 91, of Spring Lake passed away Tuesday, November 30, 2021. He was born August 27, 1930, in Chicago to Simon and Anne (Hagerty) Kennedy. On October 23, 1954, he married Barbara Tomchek and she preceded him in death on September 21, 2018. Bill was a member of St. Mary’s Catholic Church in Spring Lake. Bill started Air Master Systems, Inc. and ran that until his retirement. He was an avid fisherman and always enjoyed his fishing trips to Canada with his fishing gang. He was a gifted athlete and a lifelong Chicago sports fan. He enjoyed traveling, spending time with his family and friends, and especially cherished the time he spent with his grandchildren and great-grandchildren. Bill was a great example of how to live a full and happy life and will be greatly missed. In an Irish family, one never says goodbye, it’s until we meet again. He is survived by three sons: Barry (Kathleen) Kennedy, Brian Kennedy, Scott Kennedy; former daughter-in-law, Margie Kennedy; six grandchildren: Kristen Kennedy, Kelly (Adam) Debrowski, Molly Kennedy, Nick Kennedy, Dana (Matt) Drake, Tara Kennedy; three great-grandchildren: Liam, Nora, Giavanna. He was preceded in death by his brothers: Simon, Donald and Robert Kennedy. There will be a Mass of Christian burial at a later time. Memorial contributions in memory of Bill may be given to Love in Action of the Tri-Cities. Please sign the family’s online guestbook at www.sytsemafh.com.

The family of William "Bill" Kennedy created this Life Tributes page to make it easy to share your memories.

Send flowers to the Kennedy family.