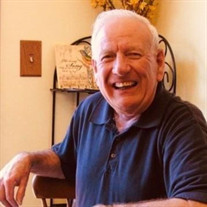 January 22, 2022, while his wife and children surrounded him praying the Lord’s Prayer, William (Bill) Nicholas Michels breathed his last earthly breath and entered into Paradise with his Savior and LORD, Jesus Christ. He was born April 14, 1941, in Grand Haven to William Nicholas and Florence May (Kanouse) Michels. After his father’s early passing, his mother married Marshall (Bud) Botbyl, who became his dad. On November 20, 1965, Bill married the love of his life, Pamela Marie Voltz. Bill served in the U.S. Army, National Guard Reserves with an honorable discharge. After retiring from Eagle Ottawa Leather Company, he took a job that he thoroughly loved, greeting people at Walmart. Bill was a member of the Grand Haven Church of the Nazarene, where he previously served as a board member, an usher, teaching Sunday School, and later leading nursing home services for precious seniors. Bill loved God and people deeply. He relished in the study of the Bible and often spoke of his desire to follow Jesus. Bill thrilled in life! He enjoyed his family and friends and welcomed strangers. He was an avid sports enthusiast, especially when it came to his beloved Detroit Tigers or Lions. He rarely missed a game or the opportunity to cheer his teams on. He held a storehouse of sports trivia and enjoyed bowling, fishing and golfing. He was especially known for his bowling abilities (achieving the desired 300 game) and winning many a bets. No doubt, Bill was a little mischievous; once capturing a skunk and trying to pass it off to a neighbor and to his mother’s horror, coming home carrying that pungent odor into their home full of guests! Bill was known for his adventurous stories and his ability to tell them, long walks (15-20 miles), love of burnt toast, bubble gum, crackers and milk, cold hot-dogs and white bread, Fricanos pizza, endless tea or coffee, slobbery kisses and whisker rubs. His disposition was joy and laughter, kindness and gentleness. He was generous and unoffendable. Bill shared the Gospel in words and stories, but especially in being who God created him to be. He made sure that he connected with each person in a way that made them feel loved: a phone call just to say, “I love you,” playing ball after a long days’ work, playing board games and annual fishing trips with each of his children, and of course shopping and taking trips with his beloved wife. Bill is survived by his wife of 56 years, Pamela; four children: Wendy (Daniel) McGregor, Patricia Michels, Melissa (Gregory) Anderson, and William (Bill) Michels; seven grandchildren: Tara (Andrew) Wheeler, Autumn (Javid) Zahir, Amanda (Jake) Holub, Mitchell Anderson, Gerrit Anderson, Alex Michels, Steven Grelewicz and nine great-grandchildren. He was preceded in death by his father, William Michels; sister, Marsha Botbyl; mother, Florence Botbyl; dad, Marshall Botbyl and grandson, Spencer McGregor. A celebration of life will be held 11:00 AM Saturday, February 12, 2022, at The VanZantwick Chapel of Sytsema Funeral & Cremation Services, 620 Washington Ave, Grand Haven, MI 49417. Memorial contributions in memory of Bill may be given to Hospice of North Ottawa Community or the Greater Michigan Chapter Alzheimer’s Association. The family welcomes online guestbook signing at www.systemafh.com.

January 22, 2022, while his wife and children surrounded him praying the Lord&#8217;s Prayer, William (Bill) Nicholas Michels breathed his last earthly breath and entered into Paradise with his Savior and LORD, Jesus Christ. He was born April... View Obituary & Service Information

The family of William "Bill" Michels created this Life Tributes page to make it easy to share your memories.

Send flowers to the Michels family.