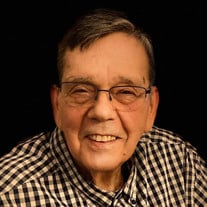 William “Bill” Henry Palermo, age 80, of Spring Lake passed away Sunday, March 27, 2022, at Mercy Hospital in Muskegon. He was born February 28, 1942, in Chicago, IL to Anthony George and Pearl Josephine (Sitzler) Palermo. He married Marcia Rae Bruhn on September 15, 1962, at St. Mary’s Catholic Church in Spring Lake. Bill served his country in the Air Force. He worked as a mechanical designer for Steelcase and previously had worked at Bastian Blessing and Herman Miller. He was a member of St. Mary’s Catholic Church and the Charles A. Conklin American Legion Post #28 in Grand Haven. Bill and Marcia were foster parents for twenty years, caring for infants. Bill was always helping others, whether fixing a computer, driving someone to an appointment, or helping with a household task. His other interests were riding motorcycles, biking, boating, flying with Marc, but most of all, spending time with his family. He is lovingly remembered by his wife, Marcia Palermo; daughter, Melissa “Missy” (Daniel) Dreese; foster-daughter, Lisa Watkins. He was preceded in death by a son, Marc Palermo on January 28, 2006; foster-daughter, Anita Robertson; sister-in-law, Kay Gardner; and brother-in-law, Gilbert Bruhn. A Mass of Christian Burial will be held at 11:00 a.m. Saturday, April 2, 2022, at St. Mary’s Catholic Church with Rev. Ken Schichtel as celebrant. Military honors will be accorded him by the American Legion Charles A. Conklin Post #28 Honor Guard. Friends may meet the family one hour prior to the mass at church. Memorial contributions in memory of Bill may be given to St. Mary’s Catholic School. Arrangements entrusted to The Spring Lake Chapel of Sytsema Funeral & Cremation Services, 213 E. Savidge St., Spring Lake, MI 49456. Share memories with the family at their online guest book at www.sytsemafh.com.

The family of William "Bill" Henry Palermo created this Life Tributes page to make it easy to share your memories.

Send flowers to the Palermo family.