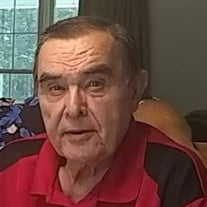 William “Bill” Francis Tolan, age 79, passed away in Muskegon on Thursday, March 17, 2022. Bill was born in Lansing, MI, on July 3, 1942, to his parents Harold and Bernice (Anderson) Tolan. He graduated from Resurrection High School in Lansing, Michigan in 1961 and then served in the Army as a Supply Specialist from 1961-1963 at Fort Richardson in Alaska. After his service, he went to Wayne State University from which he graduated in 1968 with a Bachelor of Arts in education. On April 8, 1967, Bill married the former Lorene “Lori” Schuster and they spent nearly fifty wonderful years together in marriage until she preceded him in death in 2016. Bill taught in multiple schools throughout his career, but most notably was the 28 years he spent teaching industrial arts for Whitehall Public Schools. Bill also was a member of the Sault Ste. Marie Tribe of Chippewa Indians. Bill loved to play cards, especially cribbage. He liked fishing and woodworking, and he was a fan of classic country music and pineapple upside down cake, but more than anything else he loved to spend time with his family. Bill will be lovingly remembered by his son, Greg (Vicki) Tolan; two granddaughters: Haley and Jordyn Tolan; four siblings: Mary (Jack) Weber, Jim Tolan, Joe (Alaine) Tolan, and Catherine Hollowell; Lori’s four siblings: Marlene Burke, William (Carol) Schuster, Darlene Koskyn, and Ron Schuster; former sister-in-law, Judie Tolan; and many nieces and nephews. He was preceded in death by his parents; wife, Lori; sister, Anne Tolan; siblings-in-law: Gloria Tolan and Richard Hollowell; and two of Lori’s siblings-in-law: Norman Koskyn and Teddi Schuster. The family would like to give special thanks to Bill’s caretaker, Shelby Schmidt, for her compassionate care over the last few years. A VISITATION for Bill will be taking place from 4:00-6:00 PM on Saturday, April 9 at The Lee Chapel of Sytsema Funeral & Cremation Services (6291 Harvey St., Norton Shores, MI 49444). A FUNERAL MASS will be held on Monday, April 11, at 11:00 AM at St. James Catholic Church (5149 Dowling St. Montague, MI 49437) with visitation an hour prior. All are welcome to attend Bill’s MILITARY HONORS at Fruitland Township Cemetery after the mass, as well as a luncheon at the American Legion Post #69 (803 E Colby St, Whitehall, MI 49461). In lieu of flowers, donations in Bill’s memory can be made out to the American Legion Post #69. Please sign the family’s online guestbook and share memories at sytsemafh.com.

The family of William "Bill" Tolan created this Life Tributes page to make it easy to share your memories.

Send flowers to the Tolan family.